Jennifer Pierce’s debut romantic suspense, Hidden Danger, is raking in great reviews on amazon. I had the opportunity to chat with Jennifer about writerly things including her just released follow up Expecting Danger. 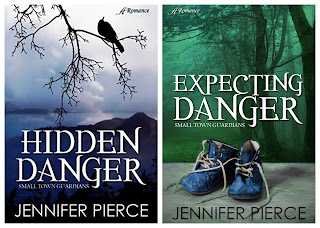 I know you’re a paralegal by day, has your experiences in the legal field informed you writing in any way?

Not really. We don’t handle criminal cases so all of the information relating to crimes and policing I’ve had to research. My addiction to #LivePD and other cop related shows has helped the most in that area. I’ve also done a couple Citizen’s Academy in my area that have helped a lot.

“Bad boys, bad boys, whatcha gonna do? Whatcha gonna do when they come for you.” Sorry, I loved cop shows back in the day! Speaking of things we appreciate, what is your favorite aspect of writing?

I love being creative, putting a story on paper and sharing with the world.

What is your least favorite aspect of writing?

Commas. Anything grammar related actually. My French grade in high school was always better than my English grade, if that tells you anything.

LOL! Some people dream of falling forever or drowning, we writers have nightmares of being chased by misplaced commas. Another aspect of a writer’s life that has been a hot topic in the twitterverse as of late, are writing rooms. Do you have a certain place where you write?

After I sold Hidden Danger, I got a desk and set it up to write. I’m sad to say, it’s currently being used to hold clothes and other miscellaneous things. I’ve found that I’m able to concentrate and write better on my lunch break. I don’t know if it’s because there’s nothing there to distract me or what. I actually write in a notebook when I write and then type it into a word document while watching TV with the kids.

You wrote Hidden Danger in a notebook? That’s incredible! You may have to break out your notebook for this next one. Imagine that the readers of this blog belong to an alien race who don’t understand verbs and tell us a little about Expecting Danger. (Just kidding, the alien race that follow this blog do understand verbs, so feel free to use them)

You nailed it! Great job!

If you see the answer to question number three, you’ll know why that was hard for me! The official blurb, complete with verbs is:

Kate has been on the run from the men who killed her husband and left her for dead—which isn’t easy considering she’s eight months pregnant—but now they’ve found her. Again. Still reeling from her late husband’s betrayal, the last thing Kate wants is the help of a handsome stranger.

Security expert, Jacob Jones, is still grieving the loss of his pregnant wife, and he’s not ready to move on. But when he thwarts an attempted abduction of the beautiful Kate, he finds himself inexplicably drawn to her. Despite her reluctance, he’s determined to do whatever it takes to save her, including giving up his own life.

Kate’s only option is to take a leap of faith and allow Jacob to help her. But can she trust him to keep her and her unborn baby alive? Or will he fail her like everyone else in her life?

Sounds intriguing. I’ve read in other interviews you’ve given that you are a pantser and not a plotter? Did that make writing a sequel (of sorts) more challenging?

I really didn’t have much trouble writing Expecting Danger other than trying to remember names and details from Hidden Danger, which I think even plotters have to deal with. I’m currently working on the third in the series and am having all kinds of trouble now. Pantsting worked for the first 15,000 words but the remaining 40,000 is causing me troubles.

Without spoiling anything, what scene are you most proud of in Expecting Danger?

Hmmm. That’s hard. I have two. There’s a scene where Jake and Kate have dinner with Jake’s sister Maggie and her husband Cody (the main characters from Hidden Danger). I really love that entire portion, from sitting at the dinner table to clean up. Jake makes a comment that my daughter laughed uncontrollably at, and so did my editor. If you wanna know what it is, you’ll have to read it. 😊

The second is the final scene. A friend of mine told me it made her cry.

If you can make a reader laugh and cry in the same novel, I think you’ve done your job. Do you have any advice for any new or young writers out there?

Don’t give up. Keep writing. Find other writers and get connected, you’ll be surprised the things you can learn from them.

Final question and my inner geek demands I ask this. Did you know that Jennifer Pierce is the secret identity of a DC Comics superhero? If you could have any superpower, what would it be and why?

I didn’t know that until I started Googling myself looking for reviews on Hidden Danger. My uncle owns a comic book store and is probably disappointed in me. I’ve failed the family. I think I’d want super speed. I like to sleep. I could sleep in and still make it to work on time. Plus, it’s wintertime so if I had super speed that would be less time I’d have to be outside freezing.

Super speed would be awesome! Thanks for joining me today.

Read on for more about Jennifer Pierce. 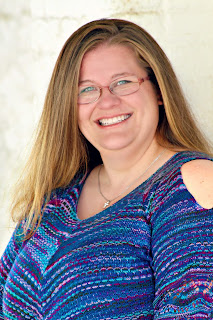 Jennifer Pierce currently lives in Arkansas with her husband and two children. She is a member of American Christian Fiction Writers and River Valley Writers, where she serves as secretary.

Check out Expecting Danger by clicking on the cover. 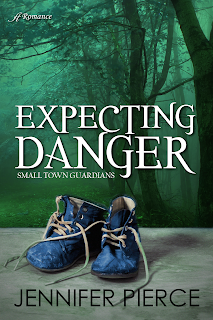 Posted by Sean McMurray at 5:44 AM